The Glass Library, home of the original ‘computers’ 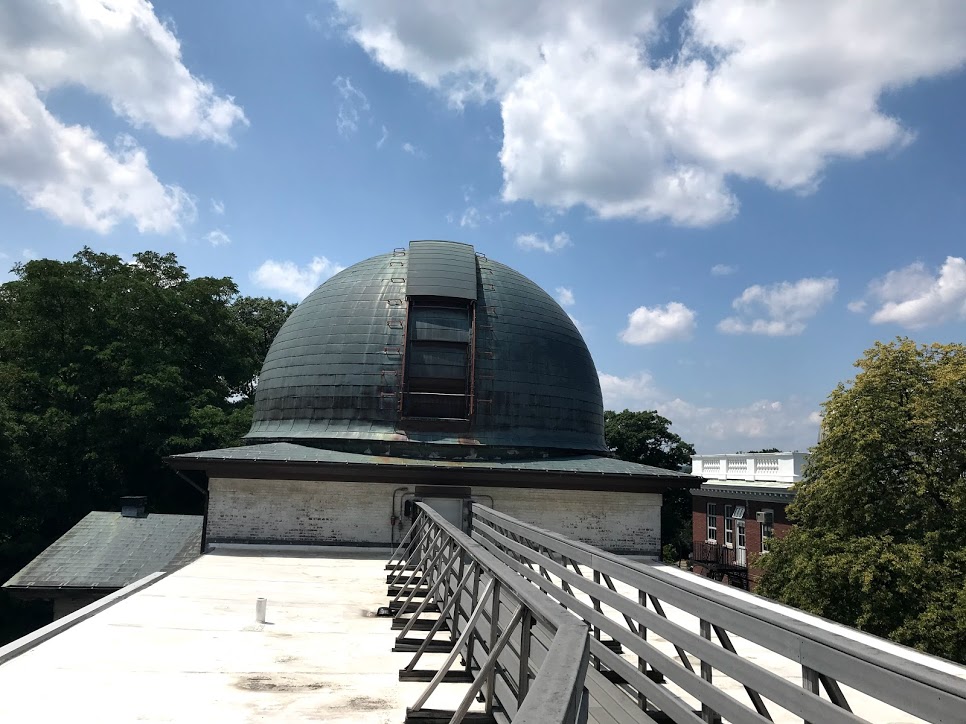 The story of my pilgrimage to the Harvard Center for Astrophysics to witness the earliest astronomical photos and view the precious artifacts of analysis that led to the greatest discoveries of our universe – meticulous science performed by the brilliant minds of the women who made up the “Harvard computers”.

My journey to the Harvard College Observatory began several years before I ever decided to go there. Oddly enough, it started on Amazon. In 2017 my perpetual habit, hunt and hunger for inspiring books of scientific discovery led me to Dava Sobel’s book “The Glass Universe“. I am – like many others afflicted by this condition – constantly enchanted by the history of Science, especially early scientific instruments. This stems from the awe I feel learning that some of the most fundamental discoveries were made with instruments of wood, tin, copper, ceramic, glass, rocks and on occasion a spark – in the literal sense and in that of imagination.

Everytime I see a modern instrument whether it be the LHC or the Hubble space telescope, I can’t help but compare them to their ancestral – and respectfully speaking – their artisinal lineage. In 1668 a young Isaac Newton crafted the first reflecting telescope composed of cardboard and a hand-ground mirror – in his dorm room at Cambridge. Marie and Pierre Curie measured ionization energies of various rocky ores using the common crystal of quartz, a simple metal balance and a turn-of-the-century voltaic battery. They labored in a dusty frigid shed of a lab for an answer to the riddle that they alone solved – radioactivity is not an anomaly limited to uranium, it is a fundamental property of matter.

Scientific discovery stirs my soul, it quickens the beat of my heart and has made my eyes erupt with tears of wonder and pride that one of nature’s endearing yet confounding mysteries has once again been brought to the altar of truth. As my eyes devoured the pages of The Glass Universe the new learning that I had ingested was tipping the scales of my “little grey cells”! My soul was joyfully fat from feasting on the discoveries made from the core of research done by the lady Harvard Computers – red shift, blue shift, spectroscopic binaries, Cepheid variables, the distance to our nearest galaxy, the size of the universe, the age of the universe!

Every chapter revealed the personal and academic journey of these women as they unlocked groundbreaking mysteries of nature. As I write this I cannot help but to ponder and romanticize, “How fitting to have the maternal spirit of these brilliant women give birth to some of the most fundamental discoveries of our universe.” Through their care, perseverance and countless other adjectives I could use to describe their dedication I am speechless reading the pages heralding their bold spirits. My modern self – steeped in social media, constantly glancing at a cell phone, sitting at a cloud-computing job and paying for a house in the burbs – I kneel in allegiance, submissive to their bravery and knowledge of the night sky.

And so there I was, laying in bed with book in hand, smiling, sobbing (again), and then it hit me. This library still exists! This observatory still exists! These artifacts still exist! I still exist! I must go! Awakened, I started to make plans to travel to Boston. I looked up the library and contacted the librarians. I explained my background as a veteran astronomy teacher and my sincere interest in seeing several very specific glass plates that I had read about in the book. The librarians were incredibly accommodating in their response and willingness to curate the items I wanted to view: the earliest images of the Megallanic clouds, the Andromeda galaxy, the earliest images of the moon and the first image of a star, beautiful brilliant Vega. Some on glass, the earliest of which were experimental metal daguerreotypes. My heart wanted to see them all, but even one would satisfy me, after all, the journey is what mattered to me at that point. The librarians were just as excited as I was, they spoke to me as kindred souls, equally in love with seeing these images in person.

As a school teacher I decided that our upcoming spring break vacation week in March would be the best time to go. Bostonians reading this are probably laughing at me now. As a school teacher from Texas I learned that much of the northeast is still deep in winter during March! I looked at historical weather, it turned out that Boston year after year was likely in a blizzard during that time. My spring break plans would have to be seriously modified. I considered the summer but unfortunately as a single-income school teacher I was always working during the summer.

It wasn’t until 2019 that I was able to make the journey. Even though my trip was delayed by a couple of years, it gave me time to spread the gospel to my students and friends about everything I had learned about the Harvard Computers. I corrected many of my lessons and presentations to include facts and the discoveries that poured out of the glass library. My students would from now on know the names Payne, Cannon and Leavitt.

In 2019 I ended my 10-year teaching career and headed back into IT. I was now able to afford – and book – my Boston adventure. The excitement of walking among all the priceless glass images I had read about washed over me anew every time I explained my trip to friends – lobster and Astronomy, what could be better? For many people going to a library doesn’t sound like an exotic destination, however, every time I explained what resided inside that library, every listening ear shared the same awe and wonder that I felt.

The Harvard College Observatory campus is an assortment of buildings housing vital functions to both Harvard astrophysics and the Smithsonian Institute. There is the observatory itself, with its massive pier and stately dome, alongside that in the adjacent buildings we find the Department of Astronomical Photographs that preserves daguerreotype, glass and film photos. Next to that is the John G. Wolbach Library, home to your traditional style books and incredibly important journals and observation logs of early astronomers.

Once I arrived I was warmly welcomed by Maria, the Reference Librarian for the JGW Library. She introduced me to Lindsay, the Curator of Astronomical Photographs. It was so wonderful to finally meet the people I had only been in email contact with now in person! Within the first few minutes of our greetings Maria began to enchant us with her skill of historical storytelling and astronomy acumen. Every page and picture seemed to have a story that she was able to recall – inside those stories she found even more interesting tangents. ((EINSTEIN STORY)) The theater in my mind was replaying these fascinating stories of science and discovery.

Maria had graciously curated some of the finest samples of early modern astronomy. For the reader I will escape from my wordy descriptions of the visit and rather explain what the images are and what their importance was to our knowledge of the heavens.

I feasted my eyes on the first morsel from the collection, the earliest images of the moon made by one of the earliest photographic processes, the metal daguerreotype. These images were at first not made for scientific or measurement purposes but rather were noted what photography “could” do. Time series observations were well known to reveal hidden patterns in nature. Compare this to one single observation – nature’s laws of motion or other behaviors simply can’t be revealed. The truth is hidden as so many of nature’s mysteries had been prior to the arrival of photographic time series images. The image on the left was an early test image of various exposure times. The shorter the time, the dimmer but more clear the image. The longer the time, the brighter but more smeared image. As noted in 1849 by Harvard president Jared Sparks, this was the first photographic proof of the Earth’s rotation! A close up of this amazing image is located here: http://preserve.harvard.edu/daguerreotypes/highlight10.shtml

The middle image is one of the earliest images ever taken of a solar eclipse, the moon eerily extinguishing an entire quadrant of the sun. From this image we can infer the relative size of the moon compared to the Sun and their apparent distances. One can study the moon’s atmosphere, or lack thereof. And finally the last image on the right is a very early image of the moon in a quarter phase with incredible detail that no one had ever before seen other than in centuries of artist sketches.

And then Maria brought out one of the originals… And then I almost died… To actually be that close to such a historical photograph that was used for science took my breath away as did all of the items she allowed me to view.

We moved on to some of the rare books, the first one was an actual copy owned by the very famous French Astronomer Messier – with his pencil and ink corrections made in this book after it went to press. His handwriting, as many of those of this time, was superb and akin more to a printed font than actually having been mechanically created by stylus and hand.

Maria next unwrapped a large box that contained an incredible tome of art and astronomy. A book of actual hand made sketches by Étienne Léopold Trouvelot. I was just awestruck at the seemingly art-deco style of his drawing, way ahead of their time, they were incredibly detailed, scientifically useful and yet respectfully artistic – taking artistic liberties when appropriate and keeping a balance between impression and scientific utility.

I want to mention that Trouvelot’s talent for solar feature sketching is second to none. As an astronomer myself I know exactly what it is like to do solar imaging and it is not fun. It is incredibly uncomfortable, you eyes blinded by the Sun even with modern Ha filters. Filters of Trouvelot’s time were made to order by hand pieces of smoked or colored glass. Prominences, flares and anything on the limb of the sun as shown above are incredibly small and difficult to pin down an accurate still image. Imaging the Sun must obviously take place during the heat of the day. This causes the subject image to scintillate from the Earth’s atmosphere churning around the observatory. Add all these challenges and I am constantly amazed at how detailed and simply beautiful Trouvelot’s sketches are. I highly recommend further reading here where more of his art can be found: https://slate.com/human-interest/2015/01/history-of-astronomical-art-etienne-leopold-trouvelot-s-drawings-of-celestial-objects.html

We moved on to viewing some of the log books. Now, these I found incredibly fascinating because these were the thoughts, calculations and observations of that actual day / month. Viewing the log books was such a treat. The handwriting, the attention to organization and structure, the sheer amount of log books some of the Harvard computers produced was just astonishing when compared to today’s reliance on word processors and spreadsheets.